The much-anticipated match which is expected to come off between Accra Hearts of Oak and Kumasi Ashanti Kotoko on Sunday 27th June 2021 in Accra, Ohene Djan Sports Stadium at 8:00 am is becoming more interesting on the part of most top celebrities and politicians.

On the part of some politicians and celebrities, Sam George and Kwami Eugene clashed on Twitter. This was as whether Kwami Eugene should perform at Accra Sports Stadium or not.

According to Sam George in a tweet, “Accra Hearts of Oak belongs to the fans. We say we do not want Kwami Eugene to perform at our stadium on Sunday. He can perform at Baba Yara before they leave Kumasi or perform on their team bus. But at our Accra Sports Stadium di3r, make them forget kraa. End of discussion.🔴🔵”.

In responding to Mr. Sam’s tweet, Kwami Eugene said on Twitter that ” Boss why are you soo Mad. I beg calm down wai. Your health is important to us all. It’s supposed to be a game of Love. I Beg You🙏🏾”. 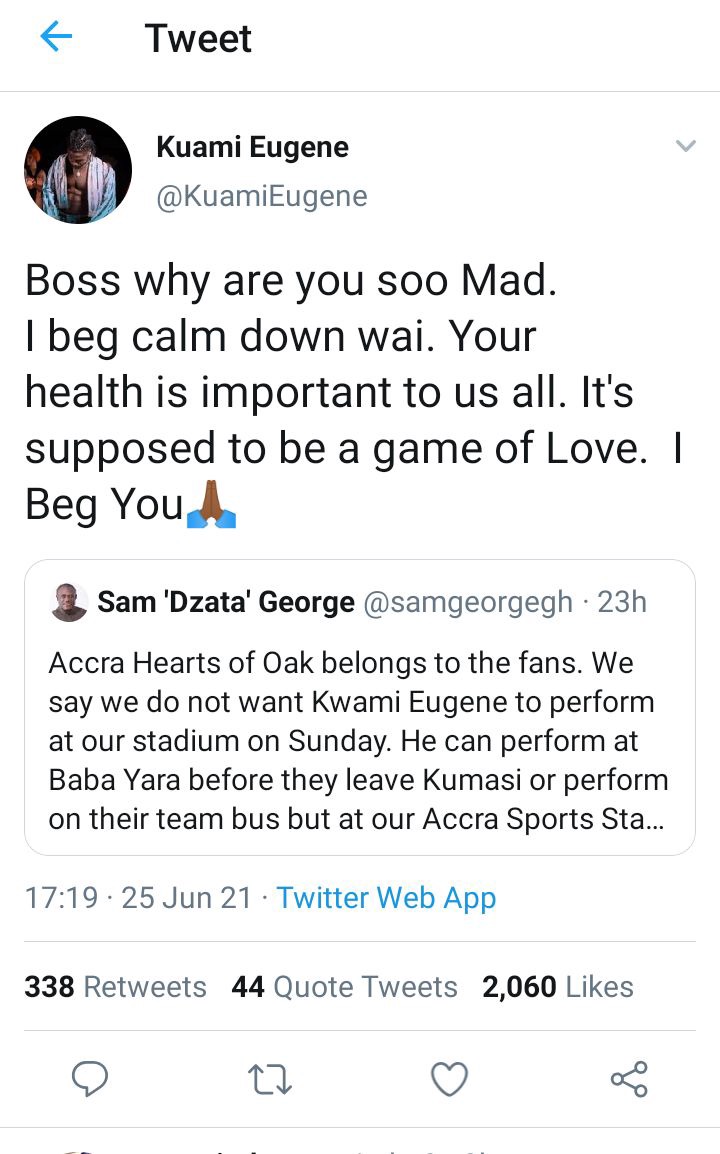 Also on Twitter this morning 26th June 2021, another celebrity has started trending already. One of Ghana’s top celebrities who is a movie actor and a politician has set the social media burning with his comment that he will sweep the stadium if in any way the match results go in favour of Ashanti Kotoko.

According to John Dumelo on Twitter, “If Kotoko wins the match, I will sweep the stadium. He stated.

This comment of his has generated lots of reactions from many social media users and other top celebrities who also have some kind of interest in the upcoming football match which is named in Ghana as “the super clash”. Many have been encouraging him of votes if he contests the 2024 general election because he can die for his electorates since he can sweep a whole stadium alone if a football match has not gone in his favour.

The most trending part of the issue is where netizens realized that Mr. Dumelo has deleted the tweet that is carrying the vow made by him. It will interest you that what he thought he deleted has resurfaced on Twitter. And a lot of people on Twitter are accusing him of being afraid or he will fail to fulfill his promise if it turns out on the part of Ashanti Kotoko to win the match.

The most question everyone is currently asking Mr. Dumelo now is “why did you delete the post?” and the simple answer that is coming from him is “it is there”. But if you scroll through the tweets of Mr. Dumelo, especially today’s tweets, you will realised that indeed the post has intensionally been deleted.